Find a Cat Collar with Bell: Visit My Blog today 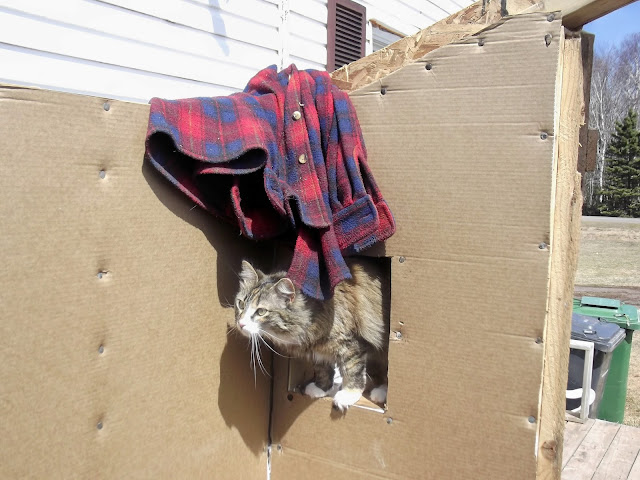 ...was out across the road where the cats normally go; a forest full interesting things to is too much for a curious cat to pass up. Yep, she found something interesting... 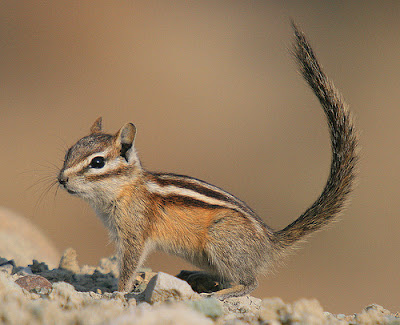 She must have chased it onto the road before she came in for treats; I had to call Winston in 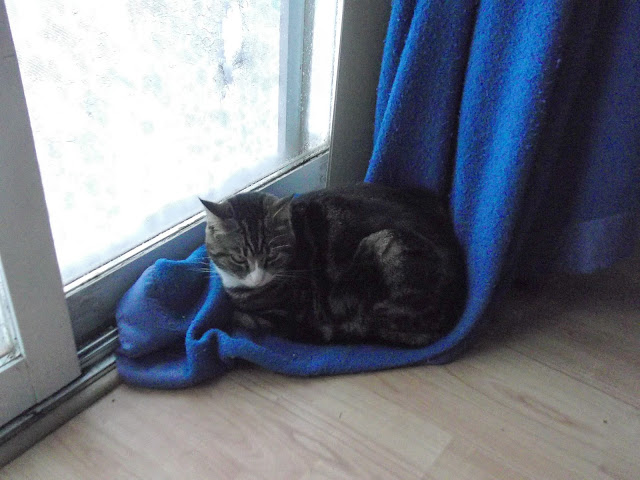 because he was too preoccupied with the activities of a crow. 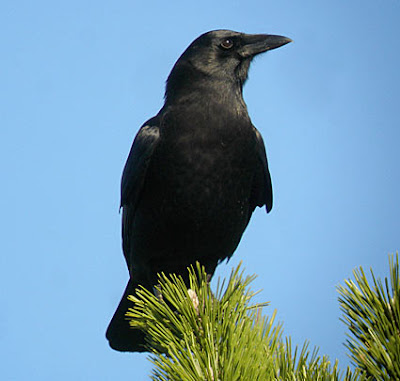 Seems the little chipmunk had dashed across our road and got itself noticed by the ever watchful glaze of a crow, sitting high in a tree top. 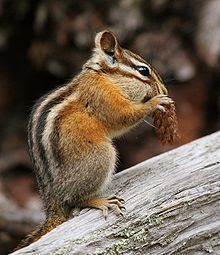 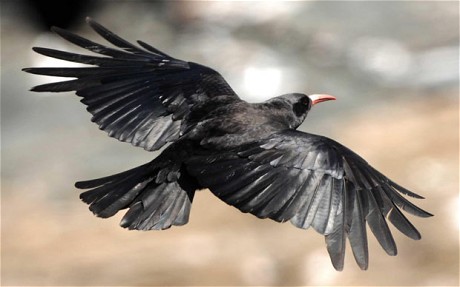 Well, the crow was thinking 'easy dinner' and the chipmunk was praying 'ESCAPE' and I was concerned because Winston was meandering on the road so I wasn't paying attention to the crow he kept stopping to watch, I was too busy watching for vehicles that might hit Winston.

Finally he came to me, then I took notice of what the crow was up to. In the driveway of my neighbor the crow was attaching the chipmunk. I yelled and it paid no heed until I came running at it, it then decided that it might be prudent to watch from on high.

While it perched in a tree, I checked the little chipmunk. It ran from me three times before I was able to turn it over in the grass and carefully pick it up. They bite - I wasn't interested in getting a needle for the bite I would recieve if I wasn't cautious so I pulled my sweater sleeve over my hand and picked it up with the other. The frightened chipmunk sank its teeth deep into my sweater and hung on making tiny squeaky noises as I held it. The crow took a keen interest in 'just what I thought I was doing with its prey...' 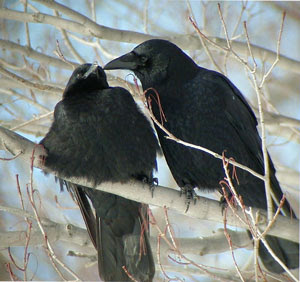 After all, he had a mate to feed! 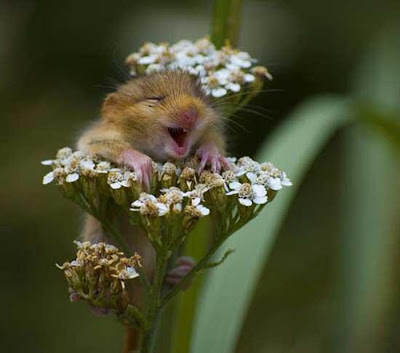 who had cupped itself into my hand and was still munching on my sweater, I took it across the road and into the forest. Finding a place with low growing, very young trees, I carefully peeled the chipmunk's mouth from my sleeve and separated the two. It curled into a ball in my palm. I placed the little guy under a low growing tree and covered its hiding place over with dead leaves to shelter it from the rain which had started to fall.

The rest I left to the Lord, its His chipmunk after all.

When I finally emerged from the woods the crow scanned me carefully to see whether I still had its dinner with me. When he realized I did not... 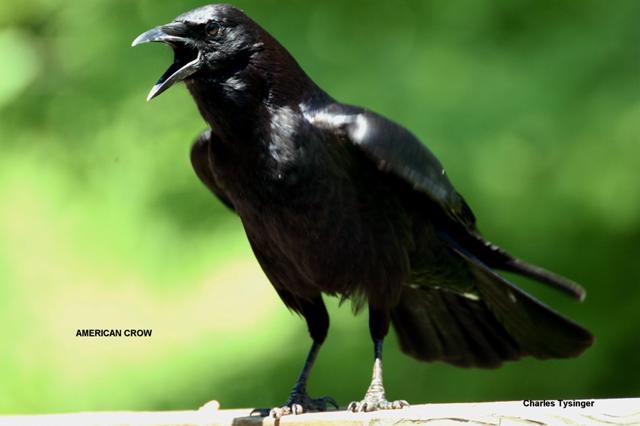 well, he wasn't too happy about it.

He flew to a nearby tree across the road but he wouldn't know where to begin looking for his lost prey.

I hope the chipmunk recovered enough to find its way back to its family and I hope the crow found some other prey for its mate.

It remains in the Lord's hands because its His business to take care of both.


Posted by Unknown at 9:21 AM No comments: Links to this post

More On Chicks and Hatching

I'm looking through a front window and a maze of two foot, indoor tomato plants where one of my cats is snoozing on the second tier of a table stand. I can hear my meat chicks loud and clear, from the back spare room as they chatter among themselves. Honestly, I don't know what they have so much to talk about but its just non-stop.

Since hatching our own chicks from eggs, which is considerably more involved - an incubator, water to create humidity, a light bulb burning day and night, a thermometer that measures humidity and temperature, marking each egg, constant monitoring of humidity and temp., daily turning of the eggs {twice a day}for about 18 days. Then for the last few days the humidity has to go up considerably while still turning them. After 21 days for chickens, your straining to hear a pip or two, informing you that you did everything right and a baby chick is alive inside the egg and is about to hatch. No an easy task for the poor little creatures. If your lucky, the chick can hack its way out on its own. If not, you may have to assist. We learned a lot.

And so, we had something like 68 eggs and out of that number 23 were successful hatching's. Even though the farm we got them from had roosters running with the hens, not all were fertile. Or, the eggs got too cold overnight before they were collected; worse still, they may have been put in the fridge... These were not because I had phoned ahead to see if they'd sell me a couple of eggs for hatching. Whether or not they were fertile was up to us to find out at the end of 21 days.

Listening for a sign of life from eggs you've pampered, nurtured and cared for over a 21 day period is a very tense situation, but nothing compares to hearing an answering chirp to you whistles! You find yourself 'rooting' for them as they exhaust themselves trying to get out, then free of their shell prison.
The result is this:
Now the 'real' work starts....

Posted by Unknown at 8:26 AM 2 comments: Links to this post

Yes, I have been away for a few months. Five to be exact.

During that busy time I have embarked on another venture, this one sort of involving cats. That of hatching eggs, raising my own chicks, building turkey hutches and insulated chicken coups. Yet another venture of purchasing day old meat chicks. Quite an experience that has been so far.

So I figure I have all but lost my readers as a consequence. Well, maybe they will find their way back and/or I will be lucky enough to attract new readers.

Over the next few days I will be writing some blogs recounting my experiences so far in this new venture. In the meantime, here are some appetizers. These were all taken in April of this year. 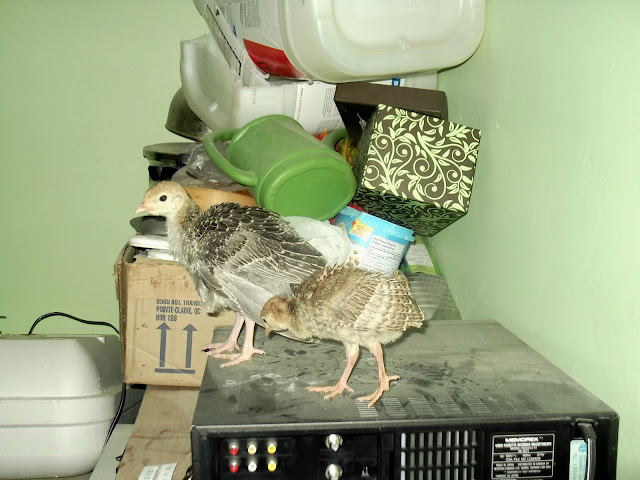 Amber and Rue, my turkey chicks from New Brunswick. Rue, the little brown one, has since died. I have no idea why she started to sicken or what make her ill but I lost her and that was a small tragedy for us. She was the cuddler and loved nothing more than cuddling under your chin. 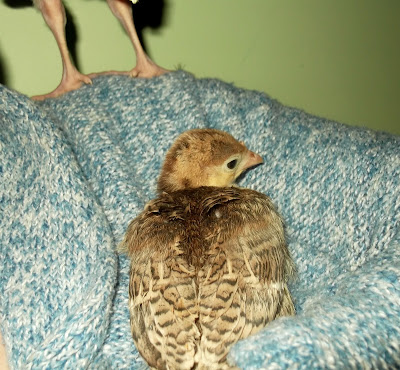 A close up of Rue 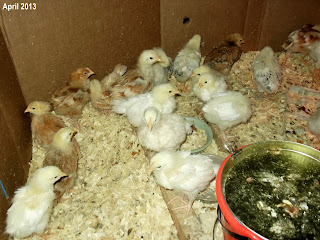 The chicks I hatched from eggs I got from a nearby farm who had Roos running with the Hens. 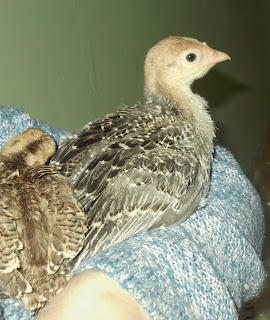 Close up of Amber, she may be a he, don't know yet... Rue is sleeping beside her. My cats, at least one of them. A cats on every available chair and surface around here.
Catspaw
Posted by Unknown at 11:27 AM 3 comments: Links to this post

Online Thesaurus.com says that the word Resolutions belongs in Category 1 and means Acts of Volition or determination and strong will. There are a few other words that I will take for my own this year: boldness, constancy, courage, fixed purpose, fortitude, mettle, moxie, resolve, spirit, tenacity, willpower and decisiveness.
Dictionary.com has this to say about the word,
1. Noun: a formal expression of opinion or intention made, usually after voting, by a formal organization; a legislature, a club, or other group. Compare concurrent resolution, joint resolution.
2. A resolve or determination: to make a firm resolution to do something.
3. The act of resolving or determining upon an action or course of action, method, procedure, etc.
4. The mental state or quality of being resolved or resolute; firmness of purpose.
5. The act or process of resolving or separating into constituent or elementary parts.
Being the first day of the New Year everyone will welcome it with the usual round of resolutions, the promises we make and break to ourselves, our loved ones and possibly the Lord too. I've always considered it to be a silly tradition because tradition is what it has become. Instead, may I suggest making a choice of a few words that have a meaning or power to you and setting your will on them. Its just too easy to go back on our word and the resolution that seemed so powerful and life-changing at first, is suddenly drained dry when we really don't feel like following through on it anymore, which will inevitably happen.
Why make promises when a single word can carry more power and purpose in it, especially if you have certain goals to meet this year. Mine are simple because simple is easier to achieve...
1.   Save $2,080 by the end of 2013 (I already have $240). Seems small, doesn't it; but when you have obligations to meet and a budget to plan, working this in is HUGE.
2.   Read my Bible daily. (I finished Isaiah last November). I start 2013 with Jeremiah.
3.   Work on a few personal goals.
4.   Start writing my stories again and get them finished by the end of the year in manuscript form.

Posted by Unknown at 7:43 AM No comments: Links to this post 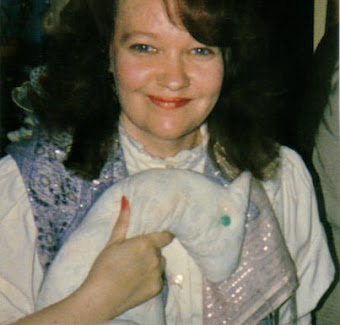 I am an experienced & knowledgeable champion of animals, in particular cats. I am a lifetime matriarch of these intelligent mammals & have had a lifetime of observance of them through which I have come to know their individual personalities. I created this blog to share my knowledge on behalf of the four felines that share my home & my life. They have much to teach us if we only listen.
I will also be sharing, from time to time, Other Stories... visit often for those.

PAGEVIEW OF THE PAST WEEK

My Most Popular Blogs! Find Out Why...

Welcome to my CAT COLLAR WITH BELLsite

This site is known as CAT COLLAR WITH BELL. Much can learnt about cats from cats and their mews. It has useful info. about cats, from their breeds to finding a Cat Collar With Bell. I write unusual stories, poems, post silly pictures, recipes, cat tree plans; I plan to post other things also. So visit back often; I post a blog nearly every single day!I appreciate the time you are taking to stop by my Cat Collar With Bell to learn about cats from cats and their mews site. I hope you find something of interest to you each time you visit. Welcome, feel free to browse. Its wonderful of you to visit me...

IF YOU UPSET ME, I'LL SCREAM! THEN YOU'LL BE SORRY

I THOUGHT I TOLD YOU ITS 'MY' BED!

Tammy has a NEW Blogsite; Check Out All Her New 'Stampin' Creations Here!

I 'AM' AN INTREPID EXPLORER AT HEART, CAN'T YOU TELL!?

I'M UNDECIDED WHETHER TO GET OUT OF BED THIS MORNING. I THINK I'LL JUST LAY HERE TILL I MAKE UP MY MIND

Shop Amazon For everything you need